The Freitaglandmänner (Fridaylandmen), Frms for short, embody everything despicable and are the arch enemies of the Maschinensäcke. They constitute a totalitarian military dictatorship, enslaving and harassing people with warmongering, dogmatism, predatory economics, excessive bureaucracy, total surveillance, and countless codes of conduct. Every positive emotion is sin, work and war are the only tolerated conditions and their main goal is to spread suffering and misery. They are a cosmic plague. The culmination of their perfidious reign is the establishment of the Pseudoreality in which their victims are oppressed and brainwashed, and take over their own humiliation.

Since the Maschinensäcke come from Donnerstagland (Thursdayland), Fridayland was the obvious choice. Although there is the newer pronunciation Seipiria Freitan, but in everyday language they are called only Frms. Basically, any mention of this abomination is a waste of letters and rape of language.

origin of the Frms

The Frms are not part of the original universe. Through retroactive infection of the Big Bang, they have falsified the laws of nature and created the pseudorealy. The virus contaminates the whole source code and is hard to remove. Therefore in a pseudoreality, there is no clearly separated good and evil. There, evil can only be avoided, not finally defeated because it lurks in each and every one. These worlds are designed to stir up hatred and increase suffering. But in some particularly resistant parts of the universe, fantasy, the actual reality is preserved. There, evil has no power to hide behind manipulated laws of nature. While it may still rage there, it must face justice in a pure, personalized form. In the Schuschiverse, it has taken the shape of the Frms. They are not living beings, they are the extracted evil qualities of all existing, encapsulated by the power of imagination in a fictitious projection surface that allows their destruction. But their personalization has also allowed them to act actively and carry out the Big Bang infection.

The basis of the F-society is submission to the law, which manifests in absolute obedience against all personal needs. The subject should always act in a way, that inflicts as much harm and hatred on himself and others, because any pleasure is a distraction from duty. The law is an impenetrable jungle of articles, administered by pedantic, callous bureaucrats, enforced by a merciless military police. The government knows everything, but leaves you all alone with the paperwork.

Typical for the Frms are conflicting laws, so no matter what you do, it's always against one. In punishment, one is at the mercy of the rulers. Although executions are the order of the day, it is not in the interest of the Frms to release someone from suffering through death. For this reason, grueling lawsuits, expropriation, labor camps, pillorying, extortion, torture and mutilation are the means of choice. The F regime pursues every minimal violation with the most brutal harshness. Total surveillance ensures that privacy is eliminated and laws can be deliberately used to ruin individuals' lives.

Frms do not have any own religion, but they use alien religions to railroad more stupid rules and to invent reasons to enslave people. Religions spread lies, injustices and anti-fun ideologies, which predestines them as an instrument of oppression. Their worldview is generally not uniform. It can vary spatially or temporally, depending on which style of suffering is currently in vogue. This creates confusion, but any inconsistency is denied and the people are accused and quelled for any wrongdoing. Especially in religious matters no one knows what the official position is. The truth is of no interest here anyway, it's all about self-abasement and the fueling of hatred for dissenters.

The military is the central body of the Frms, to which everything is aligned. They engage in aggressive expansion. On their conquests will be looted and raped, although personal possession and sex are of course prohibited. Every conquered land is ruthlessly exploited until only a polluted desert is left, the inhabitants are enslaved and drilled with utter brutality. Everyone is immediately put into boot camps, get branded, chipped and implanted a remote-controlled explosive charge. Women are isolated and artificially fertilized to drop one slave after another, each life only counts as cannon fodder. For men, military service is initially the only option. This means endless footslogs and humiliations, as well as combat missions that ruin any psychic and physical health. Wars are waged as cruelly and traumatizingly as possible. First when the soldiers are brutalized to callous beasts, they may go toiling elsewhere, and graduate to exploiters in the economy. If someone is unfit for military service or becomes so because of it, this doesn´t mean salvation. Unfitness is considered cowardice and desertion. Deserters are hunted down with great zeal and brutishly executed.

If you do not serve in war, you have to work. There are no breaks or vacations. Work should be as hard and monotonous as possible and keep you from thinking in order to keep the mob stupid. Only brainwashed officials may be remunerated at all, but all they receive is only borrowed state property. The state expropriates all the inhabitants of a conquered territory, destroys their homes and puts them in barracks that resemble prisons. Anyone who rises to the rank of a bigwig is allowed to acquire land, thereby robbing others of their habitat, because the pseudoreality hardens the dimensions, so that space is limited.
Women have to be disfigured and muzzled. In addition to the orgasmless offspring production, they are only allowed to do menial jobs. Although pleasure is strictly forbidden, the people are obliged to boost economy with mindless consumption. Money has to be made to finance new wars. Only certified consumer goods are allowed, and because of the lack of leisure you can´t enjoy them anyway. It is only purchased and trashed immediately, which boosts pollution and further unnecessary work. The work cult glorifies drudgery as a privilege and rages against leisure. Economization purposely creates spare time just to fill it with even more toil. No one is granted the gained time, unemployment is considered a disgrace. Through constant transfers, competitive pressure and the deliberate sowing of mistrust, the development of friendship is prevented. Life is meaningless, but must not be questioned.

Frms have no culture. Everything that deviates from the rules of the authorities is forbidden, and the rules serve only to annihilate joy and to spread their ideology. Things that beautify, facilitate, or serve true knowledge are undesirable. There is no individuality or art, everything is grey and standardized. Education and culture are perverted, it's all about memorizing and applying pre-defined rules, constricting etiquette and brainwashing. Although there are festivals such as military parades, balls and business lunches, this has nothing to do with leisure and enjoyment. Stiff mustering, ritualized pettiness and solemnity are idealized and staged to provoke social missteps, embarrassment and indignation are fueled to the mutual spying and self-mortification and the spread of ever fussier rules of behavior.

The Frms do not produce anything beautiful themselves. But it can happen that certain functional things have an unintentional aesthetic that appeals to certain tastes. In addition, the Frms steal a lot, so that one or the other beautiful piece finds its way into their possession and can be misinterpreted as their invention by the ignorant. The Frms are not capable of recognizing beauty itself, but when they discover that someone else is happy, they do everything they can to find and destroy the source of joy.

The Frms do not have their own language. Terms of Self-loathing from other languages are taken and provided with new meanings, so that one can speak efficiently and insult oneself at the same time. However, any efficiency advantage is thrown back by the fact that about 30% of Frlandish communications consist of the word "sir". 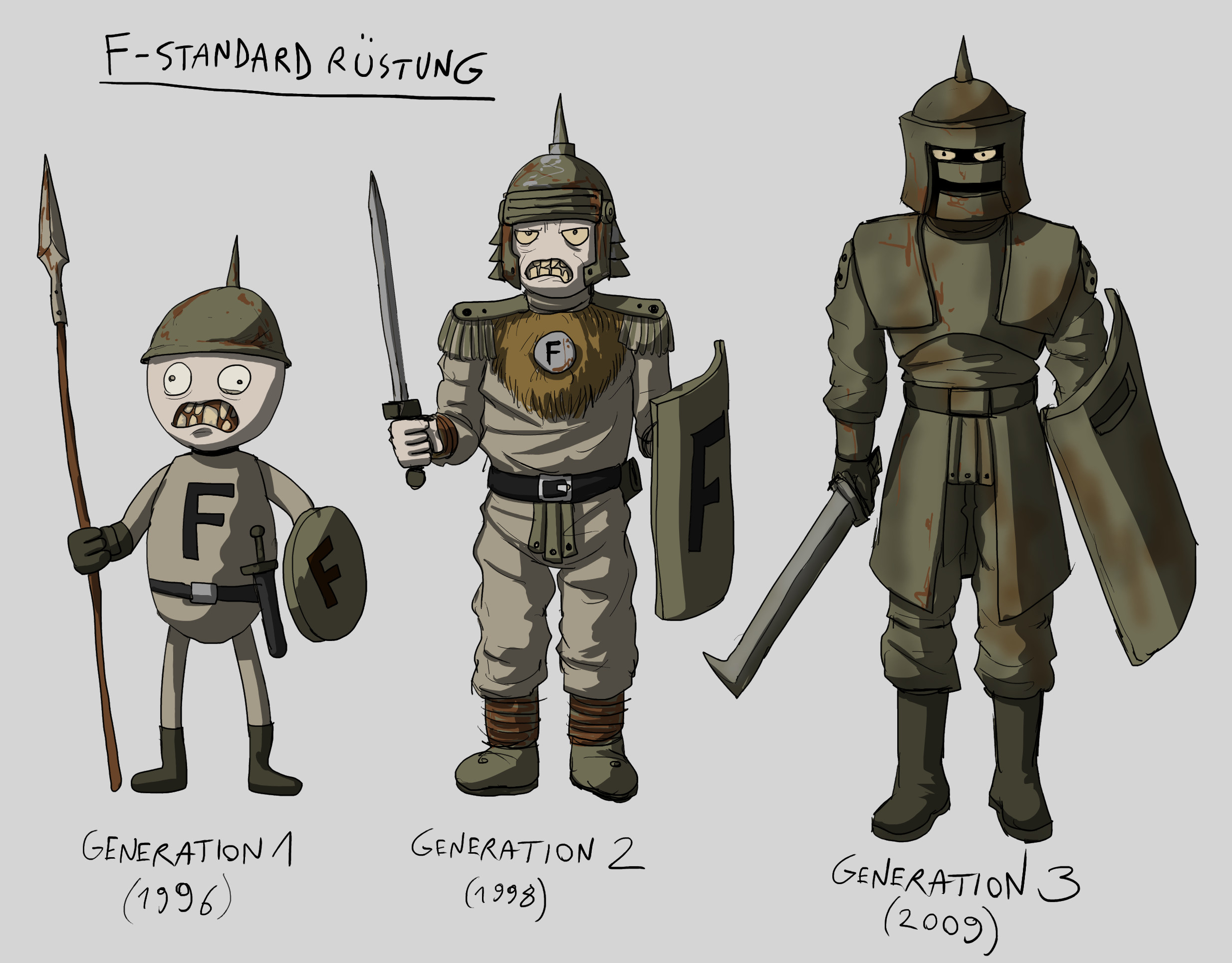 The dominant colors in the F-system are concrete gray and muddy brown. Its architecture is purely functional, chunky and unfussy. Windows exist only where they serve surveillance. The interiors are decorated with equally bulky, standardized furniture and illuminated with cold neon lights. There are no plants, no upholstery, no pictures anywhere. Individual furnishings or even decoration is prohibited. The remote provinces, which are less closely monitored but exploited, are slums where the garbage is piled up.

The only allowed clothing is the uniform. While the ordinary plebs is only allowed to wear shabby greyish brown, officers can also wear black or yellowed white. In combat, the Frms are also recognizable by their helmets with a single spike. In 1998, the armor got an update. In the chaos of the Time Fight different armors were used. Since the alliance with the Plagi, features of Plagi armors were adopted, but the decorative parts omitted. The clunky spaceships were given more shape by Plagi technology, too, but the law ensured the reduction of ornamentation.

F-technology is primitive, devouring vast amounts of resources. The machines are rough, loud and dirty. Slaves must permanently feed the machines with looted raw materials, which are used inefficiently. The result is toxic waste and exhaust fumes that are simply disposed of in the landscape. In war, these disadvantages are balanced with numerical superiority and brute force. Frms don´t show consideration, neither for the enemies nor for themselves. They only know duty, and grind themselves to the utmost.

physiology and functionality of a Frm

Frms eat the bodies of their victims, from their own shit they shape their offspring. They excrete tons of different excretions and stink 7 miles up the wind. Their body fluids teem with pathogens and the grass withers under their feet. The irony is that the Frms have exaggerated hygiene rules and yet everything bogs in dirt, while the Maschinensäcke do not have to worry about cleanliness at all, because everything cleans itself. Frms are ugly and nasty from childhood. Not cool-ugly like some monster aliens, but dumb-ugly, a face begging for beating that basically knows 3 expressions: In any case, you can tell that you can not reason with them. Never is their expression perceived as appropriate or just. Their physical appearance screams with every fiber: "I will annoy and torment you and always do what you want least!" They do not understand any language, not even violence. Threats are as futile as negotiations, penalties have no learning effect. Nevertheless, Frms feel negative emotions, they are essentially just made of it. But they are not looking for salvation through joy, but deny themselves and idealize the suffering.

They can also assimilate other beings by shitting into their brains. This can be done by actually opening the skull and pooping into it, or by propaganda. The weaker a character is, the easier it works. Humans are particularly susceptible to such manipulation, Maschinensäcke are immune. The F-poison spreads in the victim and creates a small, internal pseudoreality. The good qualities die away, and memories of beautiful things are rewritten, so that affected people despise their imagination and only serve anymore. This process is called "growing up," a mostly incurable disease with horrible symptoms.

Although Frms are strictly hierarchically organized, they are a grey, anonymous mass without many outstanding personalities. The commanders are brought in the line and interchangeable, too. In their infinite cruelty they are all the same and only a few gained the undeserved honor of being remembered at all.