Hurdelhabadan is the 2nd or 3rd planet of the solar system of the same name and homeworld of Schuschinus and the Maschinensäcken. Hence it is the cultural center of the Schuschiverse. It is a hub, in which countless dimensions and timelines converge, thus its precise origin and age isn´t determined. It´s for sure, that it is ancient and can look back on a vast history shaped by many high civilisations, but especially by the Maschinensäcke, who made it a prosperous realm.

It was in his sixth year that Schuschinus, disgusted by the coercions of society, founded his own fantasy world. In childlike carefreeness he called it "Donnertagland" (Thursdayland), where there was no school, no work, no rules, and whose inhabitants, the Maschinensäcken were all friends, peacefully pursuing their hobbies and experiencing many adventures. As counterdraft there was Freitagland (Fridayland), into which he projected all his dislikes. In addition, there was Montagland.
The countries soon became planets. One day Schuschinus wrote a story in school about a planet called Hurdelhabadan, which was spontaneously made up and had nothing to do with his main work, but his classmates began to associate him with the name, so he replaced the name of his planet with it and publicly declared himself an extraterrestrial from the planet Hurdelhabadan.
The stories about the eternal archenemies Hurdelhabadan and Freitagland took on ever larger dimensions. Soon the planets were only the core of two intergalactic empires, representative of the elemental forces of good and evil that permeated the entire universe. This led to difficulties with the variety of narrations. One time you want a space opera in which Hurdelhabadan is the uncorrupted center of the good guys, another time you want a ground-based fantasy story and you need unexplored places and a realm of evil on the same planet. That is why Hurdehabadan was declared to be an image of the universe in which many parallel worlds overlap. The continents were given the original country names.

Characteristic for the planet is its vast variety of landscapes, which are not only at the surface. Its crust resembles a sponge, interwveined by many caves. Its cloud cover counts as landscape as well, which can be stepped on. On Hurdelhabadan there are no states or borders. One can move freely and settle everywhere without bureaucratic hindrances.

The historically most important continent is characterized by lush vegetation and vibrant cities. It has distinct seasons with diverse and occasionally extreme weather. This doesn´t mean trouble or danger for the inhabitants, but joy, because everyone can choose, how far he wants to be affected by that (see user-friendly nature). Deluges provide swimming fun, hurricanes are are rollercoasters, snow masses are shaped to mazes and castles for exciting adventure games.

The largest continent passes all climate zones. It has its name from its crooked shape.

Montagland was a separate planet, also calles Etolabadan, but a continent is enough. There is temperate climate and cities that emulate certain epochs.

Freitagland is a separate planet, also known as Seipiria Freitan. In the Timefight Constellation, a lava bridge is created between Hurdehabadan and Freitagland, on which the decisive battle is fought, which is the end of a temporal loop, with Frland being absorbed by Hurdelhabadan. On one timeline, Frland then occupies the undefined reverse side of Hurdelhabadan as a continent. On the part of the Frms, there is immediate aggressive spread and environmental pollution. Here, the Cube serves as a defense system, that encloses the infected half of the planet and automatically eliminates regrowing Frms. A few get through again and again. Since the Timefight is the end, this scenario represents the beginning in the temporal loop, in which Doland and Frland were still countries. Frland is a dead, barren desert full of piles of rubbish and contaminated mud holes. Cities are gray concrete deserts. The only life on the streets are soldiers exercising and patrolling. Workers toil in factories and quarries or are locked in their cells. Even when the Frms are on Hurdelhabadan, they have no power to corrupt the planet. Their realm is isolated from the rest of the planet. And when they venture out, they are overwhelmed by the determined resistance.

The wood island is a tiny continent, but covers the wood needs of the whole planet. Here are no inhabitants, only rangers and lumberjacks and a tree sign factory, which produces heaps of small plastic signs with numbers, because no tree log is complete without such a sign.

The oceans are made of fresh water, except for the antarctic Ocean, which is separated by the poison stream. Under water, inhabited and abandoned cities are spreading as well. 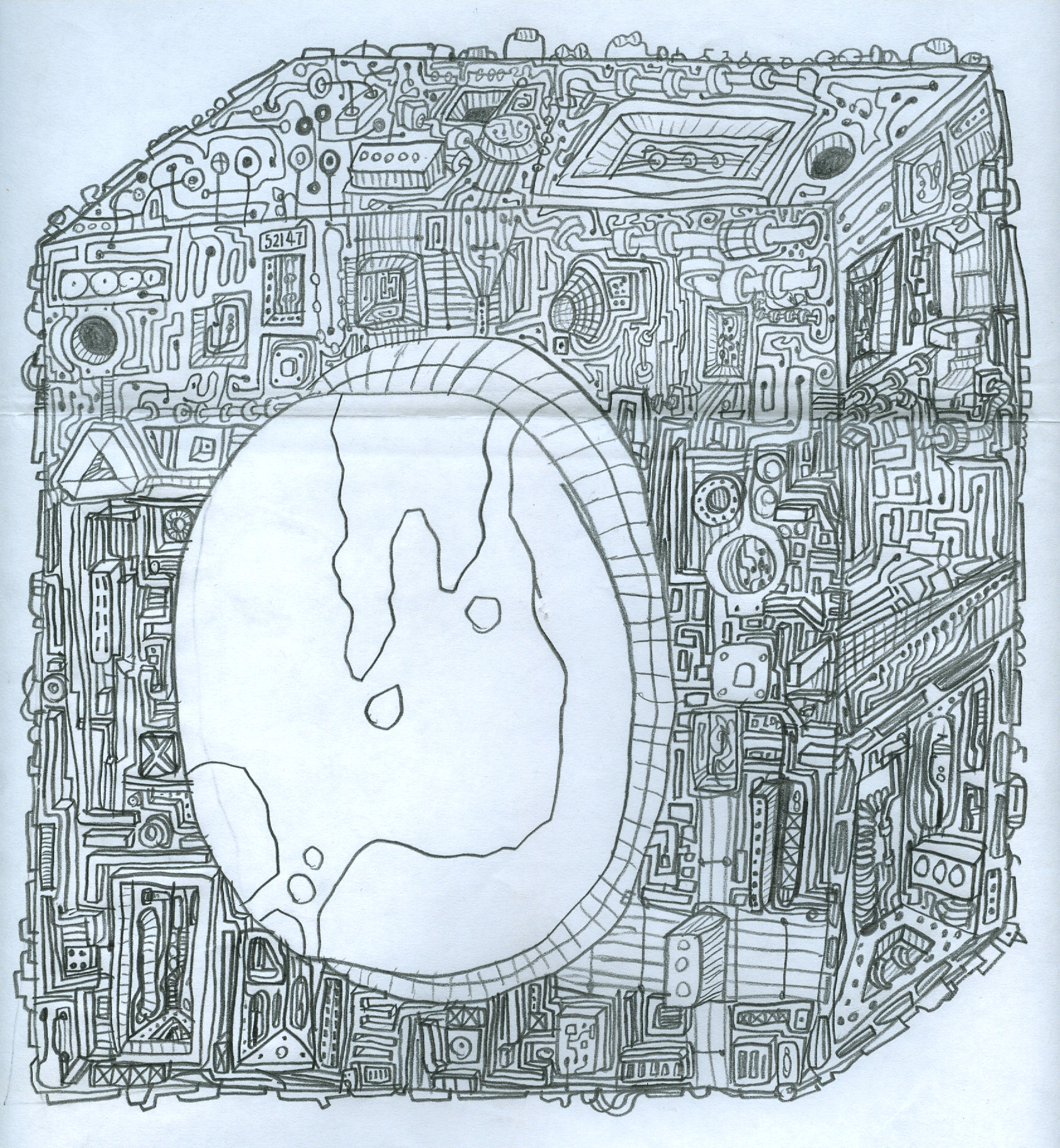 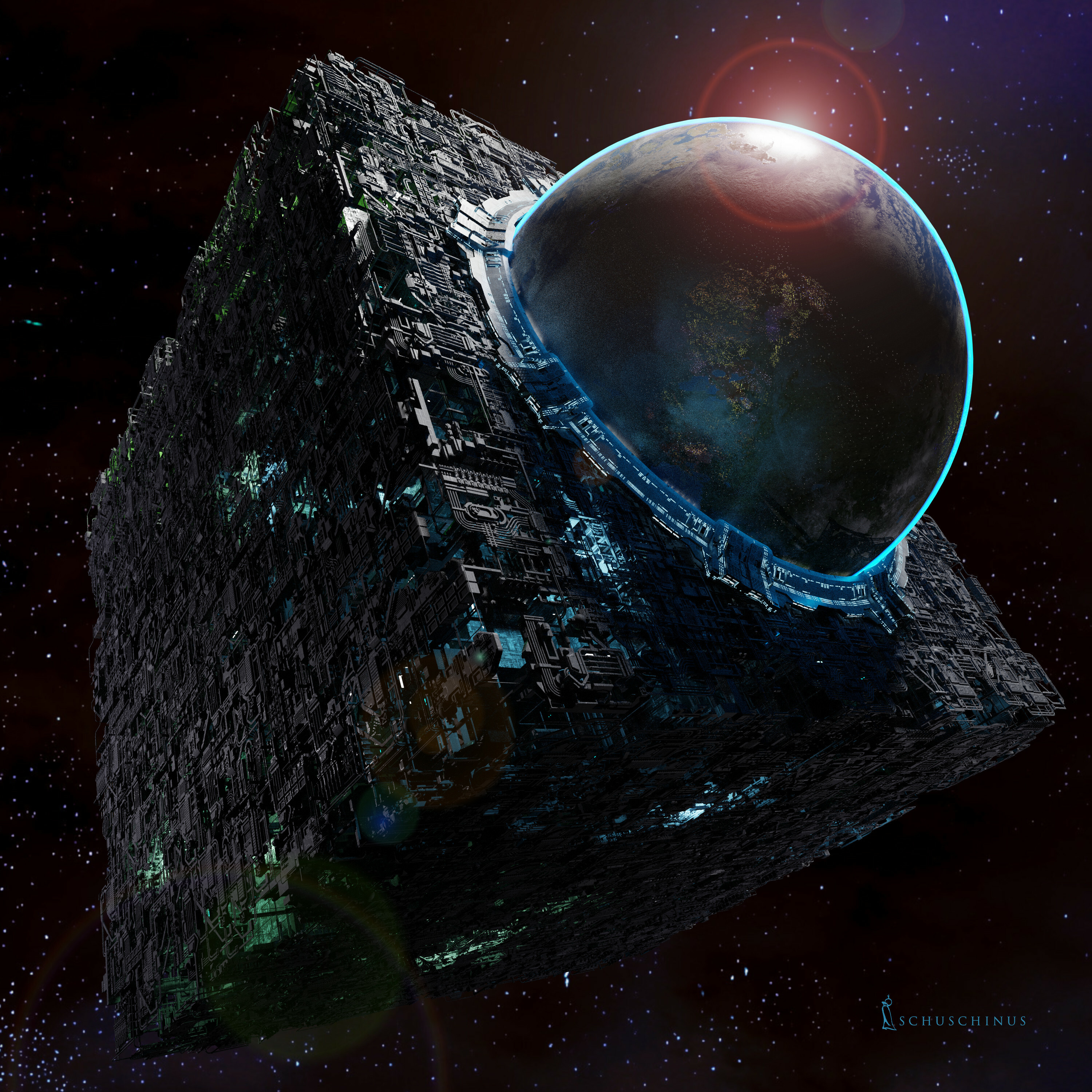 Already in the first comic a carrier ship for the planet was introduced, which was a plagiarized borg cube. Besides there was a small cube, orbiting the planet like a moon. For a long time the Cube had no deeper purpose than to look cool, but finally it got its meaning from the eternal cycle of the Timefight.

On Hurdelhabadan the technological singularity has happened, nature and technology form a symbiosis. The borders between material, spiritual and virtual Levels disappear, fantasy becomes reality and natural laws are adapted to the needs of the inhabitants.

Life is sustained only through the will to live. The quality of life is determined by imagination and inner attitude.

Basically, everything can work as a self-contained cycle and be self-sufficient. Everbatteries and cordless sockets deliver endless juice. Beside that, there is no energy problem, since any source of energy can dynamically be tapped by wormhole. The tapped energy automatically replaces the necessary physical technology with microscopic, energy-efficient force field technology, which makes everything completely independent. In addition, plants collect solar energy and pass it on to the root network. Devices can be plugged to any tree.

There is no incompatibility between different technologies or lifeforms. Everything can communicate wirelessly and, if desired, connect automatically. The own consciousness is used as operating system and programs applications according to individual need without certain hardware requirements. These features form the Schuschinet. Technology and Nature are a unity on Hurdelhabadan. Wether something looks more like nature or like technology, is based on the preferences of the user.

Transience on Hurdelhabadan is not a vicious destructive power that unsolicitedly wrests loved things from you. Nothing breaks by itself, unless the owner voluntarily hands it over to transience or purposely destroys it, e.g. food notices when stored as a stock and does not spoil. Things like houses and machines do not require maintenance and are not affected by weather. But because archeology is so exciting, there is optional decay. Even destroyed things are not lost forever, they can be reloaded at any time in any state, because before each change, an automatic backup is made. Aging, diseases and death are voluntary and reversible. The Frms are constantly trying to destroy everything, but the planet heals damage coming from outside.
Dirt is intelligent, too. You do not have to constantly clean and take care that you do not carry any dirt inside. The dirt stays where it belongs.

Hurdelhabadan is a hub, where many dimensions, timelines and parallel universes overlay. These can interlace and recombine. Every inhabitant gets his own version of the planet, in which he can spread at pleasure. All versions merge to a common art project, which connects at the surface to a landscape of interfaces, that defines the common visible form of the planet. Every house is an entrance into another world.

On Hudelhabadan, there is no agriculture, except for romantic adventure farms, since food can be replicated true to the original. Wood is also replicated, or comes from the Wood Island. Plantations, pastures and commercial forests are boring anyway, people prefer to build cities, parks and leave the wilderness as it is with dense primeval forests.