In 2003 the situation improved. Although Schuschinus still harped on about old topics, the pictures had more momentum and freshness again and soon things were really looking up. New comics with independent stories and characters emerged, the original canon was pushed forward without rehashes. It was decided to approve everything old as canonical, including the Era of great Failures, and not to botch up existing works afterwards, but to incorporate them into the new stories by means of references. The New Heyday lasted until 2009 and is sometimes called the 271 Era because No. 271 was the first new main character that was developed over the whole time and made his last appearance in "The Tournament".

The horniness now really set in, which motivated Schuschinus to learn to draw people more realistically. The intensive input of new knowledge and experience gave a powerful boost to the development of the worldview and productivity reached a peak. In 2008 Schuschinus really got into digital art. He acquired the knowledge and skills to make animated films and finally try out all of the visual effects that fascinated him so much. 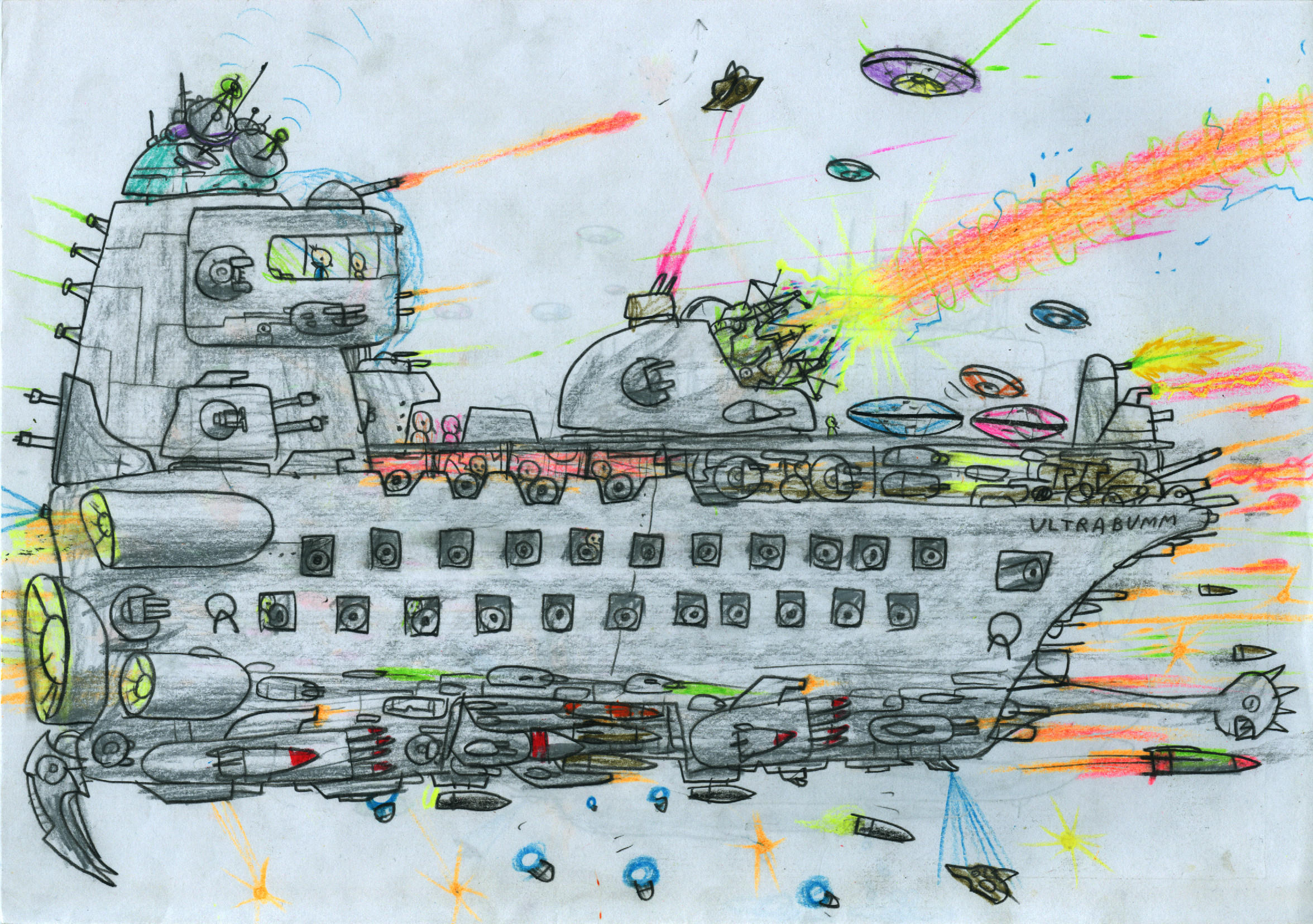 The precise style coming from the Era of Continuations got more color. New inspirations came in and more self-confidence was regained. The transition was complete with the comic "Dr. Alkohol". At the same time, people began to be drawn more realistically. The previously rather stocky bodies have become slimmer with more clearly recognizable joints and detailed clothing with an individual fashion.

Named after the first in a series of new antagonists, this period is characterized by a quick, unclean style, which sets it apart from the compulsive nature of the previous era. There was a lot of catching up to do, we wanted to move forward and not spend too much time thinking about it. Through the manga style we approached to draw human faces, which, however, immediately took on an individual development. The comics became longer, had more thematic diversity and character development overarching multiple comics.

It was noticeable that a lot of paper was used in the Era of great Failures, because so much was discarded and started over. This should now be different, drawings have become very small and dense. Every corner of the paper was used. The style became cleaner again, the backgrounds more detailed and the colors extraordinarily colorful and bright. The Bioborg crisis gave the period its name, whose comic depiction is considered the culmination of this style. Comics were now jumping between topics and treated many characters in parallel. The plots were less self-contained explorations of one topic than interwoven sub-stories designed to be continued. Paper should be saved further, but not at the expense of the actual purpose of the images. A sensible use of the drawing surface is not to pack it as tightly as possible, but to give the picture enough space. Therefore the drawings gradually became more generous again. With the Plagi, new opponents were introduced .In a new Timefight comic, the storylines built up in the Heyday found their grandiose showdown. During this time the genre "Carnage Porn" was founded, which is devoted to the representation of sex and violence in great detail. Because I can! With the skills one has acquired to draw people and all the youthful vigor to question taboos.

In addition, digital art really got going. Schuschinus was particularly motivated by the possibility of making animated films, which is why flip books lost their importance. With limited resources for the time being, all possible effects that had fascinated Schuschinus over the years were tried out. The series Adipositron was created as an experimental playground. Schuschinus already made his first experiences with 3D software here, but using it turned out to be too cumbersome. The capabilities of 3D CGI have always been appealing, but while it was new and exciting in the 90s, it was now overused in movies. Schuschinus went through his CGI-is-shit phase and initially focused on 2d animation and practical effects.

Animated films became the second main artistic Expression alongside comics. But they are only loosely linked to the comic canon and initially little decisive for the epoch-making attitude to life. That is why, and also because there is enough material for a standalone article, the films are not listed here. See Adipositron.

Still at the secondary school, it went its usual course. Then there was the horror called internship. Even if you only sit around and watch at a student internship like this, it showed how abnormal it is to work. Just the degrading application alone, in which you have to beg for work, and then the retarded discussions of the boring adult zombies. The whole idolatrous work cult, which to criticize is the modern equivalent of blasphemy, went against Schuschinus' most basic attitude to life. He never wanted to be a slave. He was an artist who valued freedom and leisure, a visionary, destined for higher goals. Therefore, he decided have holidays as long as possible, even if they were interrupted by annoying school again and again.

After this school, the next level school was made up for two years. As always, the changeover was uncomfortable and associated with many fears, but the students here were less anti-social and the lessons more substancial. There weren't any friends here either, but we still met up with the old buddy. Overall, suboptimal, but better than drudgery, that's why Schuschinus proceeded another 3 years with Abitur. Another unpleasant change of environment and the new school was further away, but in retrospect the following 3 years are among the most fruitful. Learning input, productivity, mental performance and physical fitness were at their zenith, emotions were more present and were analyzed more thoroughly. The philosophy of life was greatly expanded and refined. The artistic work had an intense connection with new experiences and one's own past. Everything felt right and well connected and were significant to the canon. The classmates were rather pleasant, there was even successful social interaction, which led to Schuschinus studying the computer in much more detail, discovering digital art for himself and finally entering the long-awaited field of filmmaking. The private learning curve increased. The school had negligible art classes, an insult to Schuschinusses genius. During this time, Schuschinus suffered for the first and only time a hormonal emergency situation, which was impossible to satisfy due to his social incompetence, and was therefore compensated with Project Target Object, a large-scale espionage operation.

Even if the school was a bit more fun here and contributed to productivity, the inadequate school system should not be glorified and certainly work and social interaction should not be legitimized simply because they were determined by nature as inevitable for personal development. The learning itself and the social contacts were enriching, but the circumstances under which it took place left a lot to be desired. The excessive number of exams and the artificially dramatized final exam were a waste of time and energy with no sustainable benefit, and there was still incompetence and injustice on the part of some teachers.

At home, Grandma became more and more frail and listless and eventually perished. This was a loss for the role-playing games, which were always so inspiring, and the first time that the shameful transience with its ruinous claws touched the sacred close environment. But even alone, important games were still staged. At Grandpa there was still lunch and a patient ear for any nonsense, even if it went in here, out there.

During this time, interest in philosophy and psychology was aroused. Part of this is also the excellent philosophy class given by a capable teacher, which unfortunately was far too short. In addition to the beef book, we now also wrote the maschinensack Necronomicon, which contained information on the Schuschiverse, thought experiments and socially critical texts. It is to be regarded as the forerunner of the Enyklopaedia Hurdelhabadanica. Schuschinus now primarily blamed the social system for the state of the world. While there was unrestrained swearing in the beef book, In the Msack Necronomicon a variety of considerations were made to fathom the evil and also to come up with counterproposals. The texts were initially very immature, but when writing down and demonizing various coercive situations, the essence began to emerge: Coercion are the root of all evil. Freedom and self-fulfillment are the path to happiness.

The Schuschinus in the comics got more to do. He now appeared as an invincible savior, who had long since had a plan in his pocket for every problem and who swept away his enemies with condescending ease. His demeanor was sometimes portrayed as arrogant and sarcastic. This may be a reaction to the fact that Schuschinus was more concerned with his personality and realized that he is anything but an assertive alpha male. He was aware of his soft core, but neither wanted to make himself vulnerable nor to adapt to the demands of the world. In the pseudo-reality, he wore the mask of the unapproachable outsider, who admittedly stands by his eccentricity, but at the same time acts as a serene cynic to shield himself from emotionality. The comics were a mirror of this attitude, which was felt to be authentic at the time, supplemented by the sovereignty and quick-wittedness that Schuschinus wished to have. Another factor is his sensitive sense of justice. The pseudoreality is unfair without any measure anyway, but the media also often showed torn protagonists and villains who were judged unsatisfactorily. Hurdelhabadan should be the unassailable refuge of justice and a clear conscience. The Frms were now the epitome of evil and Schuschinus smashed them as they deserved.